We now look at the software tasks involved in managing memory as a resource:

Computers hold data in a memory which is a large array of equal-sized storage spaces.
Each location has its own identifier: this is usually expressed as a hexadecimal number. This is the address of the location.
Inside the store is a value which is the data. The data can represent whatever you choose it to represent.

The size of the virtual address space of a particular computer processor is fixed by the architecture of that processor.

Because artificial computers are almost all digital, binary systems, the size is a typically a power of two – and most likely a power of (a power of 2).

In a simple system without virtual memory, as one process uses up some proportion of the memory it becomes unavailable for others.
With virtual memory and paging some of the restrictions can be bypassed (up to a point) but the problems still arise.
Any process will require one or more logical memory segments. (contiguous parts of the address space). Therefore, memory, as one subclass of Resources, should be allocated, managed and controlled. This is done via Memory Management.

Memory management can be done by both the application and the OS. Sometimes an application will request large blocks of memory and then allocate from them to save some (expensive) system calls.
However in the end it is the OS which is responsible for the memory as a resource.

The O.S. may need to: (The Context of Memory Management)

In a virtual memory system, a process’ address is referred to as a virtual address: this is translated to a physical address such that each physical location has a single correspondence with a process-plus-virtual-address combination.

Different machines may have different amounts of physical memory installed. However, in a virtual memory system the application can simply assume that ’all’ the memory – the amount being set by the virtual machine size – is present and it can use any which it wants.
This is also independent of other applications which may be running concurrently.

To achieve this, each process has a private map which translates the virtual addresses, which the application generates, into non-conflicting physical addresses. This solves any potential address address conflicts. 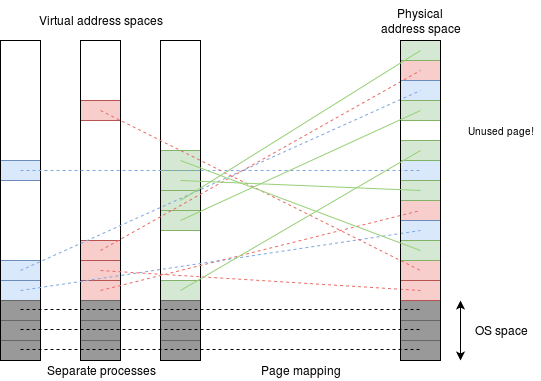 Then how to implement memory mapping? We have the following observations:

Address translation is a process to translate addresses from a virtual address space (the addresses the application is aware of) to a physical address which the memory hardware deals with.

The memory is divided logically into a number of regions in any given application. The parts of memory grouped together in these logical divisions are typically referred to as segments.
The process of dividing and grouping memory into segments is called Memory Segmentation.

can you spot any advantages in using paging hardware over trying to map variable-sized segments into RAM?

Answer:
Mapping a segment using page tables is more expensive than having a single mapping entry for the segment, but it brings a couple of useful advantages.

A page is a division of a virtual memory system (a fixed size block of memory). The whole address space is sliced into pages which – for implementation purposes – will each contain 2N locations.
The page is an indivisible block. The operating system will assign memory to a process in pages: thus a program which has (say) 14 KiB of code will have four pages in which that code will be stored.

The processor produces a virtual address from which the MMU looks up a page reference. If the page is present in physical memory the translated (physical) address is passed on and everything just works. The look-up is all done by the MMU hardware so this can all run as part of a user’s application process.

A page fault is a form of a memory fault: a hardware-level exception which causes a form of operating system call. The information about the ‘problem’ is maintained so the processor can recover.
A page fault is caused when a virtual address fails to be translated into a physical address – usually because the page is not present in the physical memory. They are usually recoverable-from.

If the virtual page is marked as not resident, things become more complicated and the operating system needs to intervene. This is triggered by the MMU hardware indicating a page fault. This loading of memory when required is sometimes referred to as “demand paging”.

The exception handler (part of the O.S.) must determine that this is a page fault and not some other form of memory fault. This checks that the virtual address and operation (such as a write) is legitimate.

If this is a genuine page fault the page must now be “swapped in”.

Memory paging is the process of modifying the context of some particular memory pages.

The O.S. has to find a page frame for the desired page. In a memory mapped system this can be anywhere in the physical RAM; it may involve evicting an existing page. There are many factors which can be considered when choosing a page to evict.

If the evicted page has been modified then it must be copied back to disk – a time-consuming process.

The chosen physical page is loaded with the appropriate contents from disk. The page tables are modified appropriately.

The figure below is an attempt to show a possible state diagram for a virtual memory page. Each potential page will have its own state. 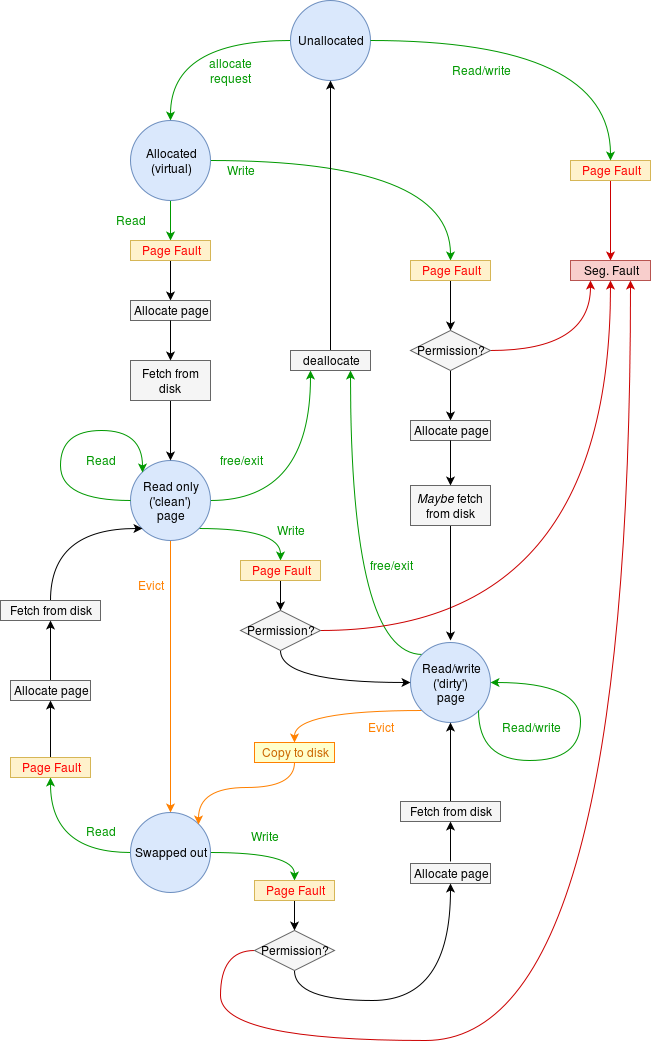 A page fault has just required that a memory page be evicted so that the urgently needed page can be loaded. Which page should be evicted?

Here are some possible algorithms for choosing:

Pinning the page is the process to avoid some important pages to be evicted.

There are some pages which should not be evicted – and others which are highly desirable to keep in memory – which contain code critical to the operating system. One example might be an interrupt service routine for interrupts requiring low latency.

Such pages are ‘permanently’ resident and are sometimes referred to as being “pinned”; they are excluded from being chosen for eviction.

Mapping the memory works okay providing that the sum of the memory used by all current applications does not exceed the size of the installed physical memory. If that happens then some more storage needs to be found.

If the demand on the physical store becomes too great, some pages are copied onto disk to free up some new space. The pages are chosen by a scheduling algorithm; this is the same principle as caching. The process is usually referred to as “paging” or “swapping”.

It is done with a combination of hardware and (operating system) software. the key concepts are probably:

The computer’s memory is a resource needed by anything and everything which executes. On the other hand each process wants its own private space which is inaccessible to other processes. This prevents contamination – either accidental or malicious – from one process to another.

It is also important to protect the operating system space from being altered by the user – except in carefully controlled ways which are provided by system calls. This includes:

Some protection can be given by memory mapping: if a process has a limited memory map then it can’t ‘see’ memory which isn’t currently ‘mapped in’.

Thus there is liable to be some memory protection which validates a particular access, using both the requested (virtual) address, the particular action and the processor’s privilege at the time.

If an access of a disallowed type or without adequate privilege is attempted, there will be a hardware exception used to invoke an operating system handler.

The sort of permissions which might be implemented are:

These will be specified in the MMU. Page-based schemes are probably the most common now, so the following description may assume this in places.

A Memory Management Unit (MMU) is the hardware system which performs both virtual memory mapping and checks the current privilege to keep user processes separated from the operating system — and each other.
In addition it helps to prevent caching of ‘volatile’ memory regions (such as areas containing I/O peripherals.

Memory Mapping involves page table look-up. The page tables are large enough to need to be stored in memory. Thus, with a two-level page table scheme every memory access is logically preceded by two more memory reads to translate the virtual address to the physical address.

Slowing down by 200% is not generally acceptable. Thus, when a translation has been done the result is cached, associating the input virtual page address with the resolved physical page. Because there only needs to be one TLB entry per page (not per address) and software typically exhibits locality quite a small TLB can accommodate most software efficiently; this can be fast, specialised hardware. 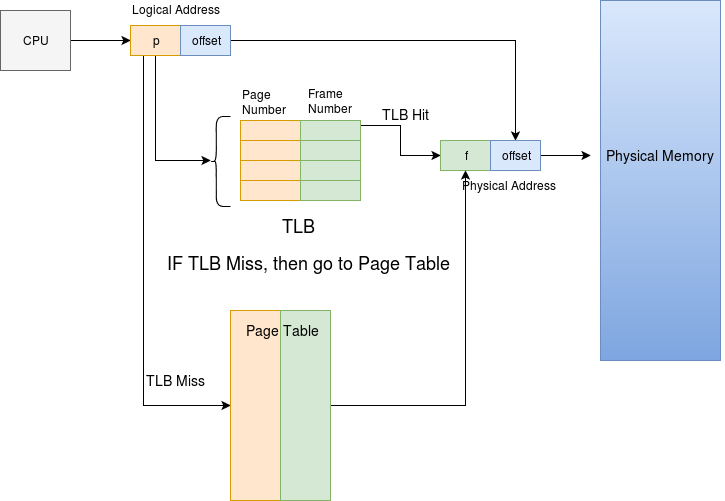 The TLB holds a recently used set of translations.

Although it is not itself called a ‘cache’ it certainly uses the principle of caching.