A computer program may be defined as the set of instructions which the computer is to follow to perform some computation.

However, when a program executes it needs more information. In practice there are often several attributes associated with this particular, executing copy of a program, such as who ‘owns’ it, which files it is using etc. The executing program, together with this information is typically called a process.

A typical operating system will allow multiple simultaneous processes. Most will allow the processes to be unaware of each other’s presence, unless the processes specifically want to cooperate. Each process has its own context so we may be able to run two or more copies of the same program on the same machine at the same time without them interfering with each other.

Most of the process’ context will be kept in memory. A process will have some address space – possibly contiguous addresses, possibly fragmented into several logical segments – which it can use to hold its instructions and variables. This will not encompass all the memory on the machine.
The operating system will also hold some private information about the process, typically in a process control block, which may keep track of the various resources ‘owned’ by this process.

An executing process will have a particular context. This is the environment in which it operates, and includes its variables and the resources which it ‘owns’.

Register values are part of the process’ context; thus they require saving (in some reserved memory, by the OS) whenever the running process changes.

The control block is the operating system’s ‘definition’ of a process. It holds information about a process, such as its identifier (‘PID’ in Unix) and its priority.

It will also hold (or point to) the parts of the process’ context which are preserved when the process is not actively running.

The PCB is another example of metadata – in this case describing the process. 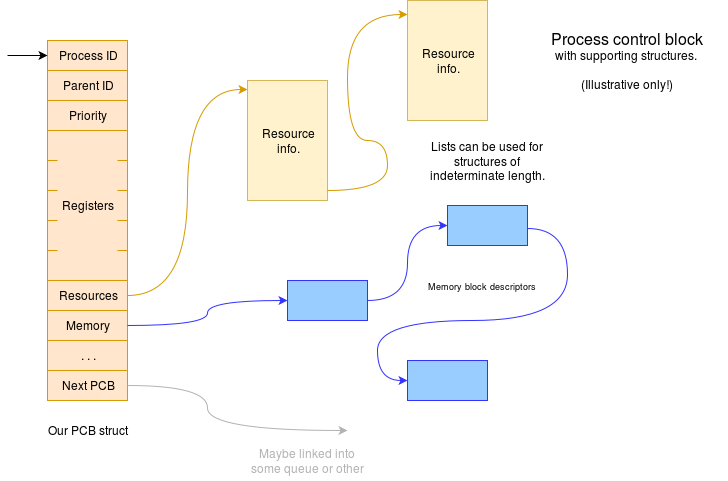 In Unix-like systems there is a hierarchy of processes, in that each process has (or once had) a parent process. 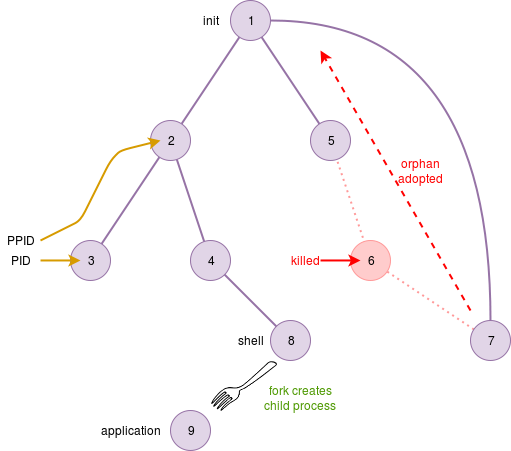 At boot time the first process (number 0) ‘forks’ the init process before becoming the idle process.

init goes on to create “child” processes. The OS maintains information on the parent (in the process’ PCB).

There is a special relationship in that a parent can keep track of its children and children can always enquire who their parent is.

fork() is the means by which a Unix process creates another process. It is a system call which is called once but returns twice – once in the calling process and again in a nearly identical copy of that code (but in a separate process).

If a parent expires before its children, the children are called Orphans, and ‘adopted’ by init.

Zombies are child processes which have terminated but this hasn’t been observed by their (real or adoptive) parent.

The OS retains the ‘dead’ process’ details until the parent synchronises with it. Zombies which persist probably indicate a bug of some sort.

A simple computer has one processor so it can execute one process at any time. You may want to do more than this and a ‘multi-tasking’ operating system provides the illusion that you can via time-slicing.

If there is more than one process to execute, one is chosen and any others are queued waiting for a turn. After some time of execution the executing process may be moved back into the queue so that another process can proceed. The exact basis on which the processes are chosen for running or eviction depends on the particular scheduler employed.

Basically, a process may have the following three kind of states: 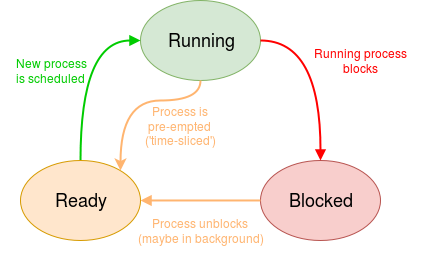 Any number of processes can be ‘Ready’ to be run at a given time. There is therefore a ready queue of processors waiting their turn for scheduling.

For an communications process, such as a pipe an input or an output should only ever ‘belong’ to a single process, so (at most) one task will block waiting for that. On the other hand, some blocks (e.g. sleep()) may also have a queue of waiting processes.

A thread of execution is a single, sequential series of machine instructions.

Threads are basically similar to processes. Threads belong within processes. The simple model is to have one thread in each process but any process could have multiple threads.

Threads share most of their context although they will each have some private data space such as processor registers and their own stack.

There are several differences between processes and threads:

Just like processes, each thread has its own state: running, ready or blocked. 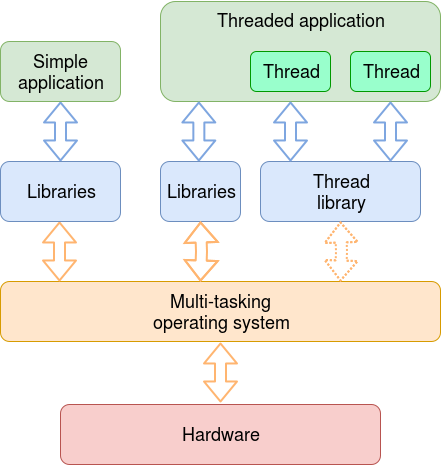 Threads may be managed by the operating system scheduler or, at user level, by a separate scheduler in the application.

Thread management by a user typically allows faster thread switching (no need for (slow) system calls) and the scheduling can be tailored to the application, with more predictable behaviour.

A potential disadvantage in managing threads at user-level is that it requires its own management software for creating, tracking, switching, synchronising, destroying threads. This may be in the form of an imported library.

Thread management by the operating system allows threads to be scheduled in a similar fashion to any process. Context switching (within the same process) can be cheaper than process switching but is still likely to be more expensive than leaving it to the application.

Multi-threading is the term loosely applied both to running multiple threads and multiple processes on a single machine.

it is most usually used when referring to threads which belong to the same program and which cooperate closely.

Multi-threaded code can offer some significant advantages to the programmer:

Multi-Threading also has its drawback:

The biggest drawback to multithreading is that it is more difficult to program this way:

‘Traditional’ programming tends to be putting operations into a sequence.

However, in multi-threading programming, when operations are deliberately allowed to happen in an unpredictable order people can get confused.

This, in turn, can lead to subtle faults, which only evidence intermittently, making debugging difficult.

It is necessary to ensure that all dependencies in the code are guaranteed:

i.e. it is certain that one thread has reached a particular point (e.g. the disk has provided the data) before another thread continues past a point of its own.

On the other hand two (or more) threads must not act in a way where they will stop each other from proceeding – a condition known as deadlock.

Deadlock is a situation where progress cannot be made … ever again.
A process can deadlock if it competes for resources with another process (or processes).

(Resource) starvation is often linked with deadlocks in that it can (potentially) cause progress to stop. However this is really more of a scheduling issue.

A process is ‘starved’ if it can’t get some resource(s) which it needs to proceed. This can be caused by other processes competing for (and winning) the resource.

multiprocessing is a resource which can be exploited by the programmer and then there is often the need to communicate between processes.

As each process has its own context – deliberately protected from other processes – interprocess communication requires some form of operating system intervention.

There are several major categories to communicate between processes:

In a multi-tasking operating system not all the processes (tasks) are really running simultaneously; at most the maximum number of running processes equals the number of processor ‘cores’ available.

The scheduler is the part of an operating system which decides which process(es) to run at any given time.
The algorithm(s) used by a scheduler to pick the ‘next’ process are many and varied and can depend on the particular circumstances.

The approach to scheduling usually varies according to the purpose of the computer system – sometimes referred to as a “processing mode”.

Periodically, the scheduler has to select the next process to run. Time-slicing with a simple round-robin algorithm would give an equal share of processor time to all processes which are not blocked. This can be too simplistic to be useful. It is often useful to be able to assign priority to processes so that some are favoured over others.

Process Priority is a value set by the user or OS based on the type of the process reflecting its urgency or importance.

A process’ priority may be set by the user (or the system) in various ways. It may be constant or calculated dynamically.

Priority can be applied in different ways too. In a real-time system it probably dictates that the highest priority ‘ready’ process runs whilst it can.

In an interactive system, this approach could prevent lower priority processes proceeding at all, so the strategy may be different.

A “priority inversion” is a circumstance where a high priority task is prevented from running by a lower priority task.

There are following possible scenarios for this to happen:

This will be a familiar mode where the user constantly interacts with the computer which, nevertheless, occasionally has some time-consuming tasks.
Scheduling is arranged to give reasonable responsiveness to various jobs as the user changes focus.

In interactive systems a common approach is “round robin” scheduling. This is an attempt to give all processes equal ‘turns’ by taking the next process from the front of a FIFO queue whilst appending a de-scheduled process to the back.
This is most obviously applicable when time-slicing, (or cooperative ‘yielding’) when a running process is de-scheduled without being blocked.
The scheduler needs to try to be ‘fair’ to avoid starving any process of a share of processor time, although the details might be influenced by the process’ priority.

Real-time computing requires a guaranteed response with a certain, maximum latency. Contrary to some opinions, this does not make it fast: in fact it is essential that the processor is regularly becoming idle because if it is not it means it hasn’t completed everything it needed to do in time.

Real-time schedulers typically rely heavily on priority, with some processes being identified as more urgent than others (i.e. low latency is required); these will typically be run in preference to lower priority (but still time-constrained) jobs.

A hard real-time task is one where failure to meet a constraint leads to a system failure.

A soft real-time task could be summarised as one where undue delay leads to annoyance.

Batch scheduling picks a particular job and completes that before proceeding to the next. It is therefore not responsive to interactions but is efficient at processing. It is often appropriate for big data processing jobs.

A common approach in batch jobs is shortest job first. A simple analysis will show that this finishes more jobs, sooner.