A typical computer might have a number of ‘levels’ of storage. The machine’s hardware view is usually something like:

File-store is provided to supply the following requirements:

The filing system lives between the user applications – which want to handle files and the disk (or other) device drivers which move blocks of data to and from.

The Filing System is clearly a part of the OS, since all processes should see the same files. In a layered model the filing system is quite a high-level OS layer. In a microkernel it may well be run (by the OS) in user mode. 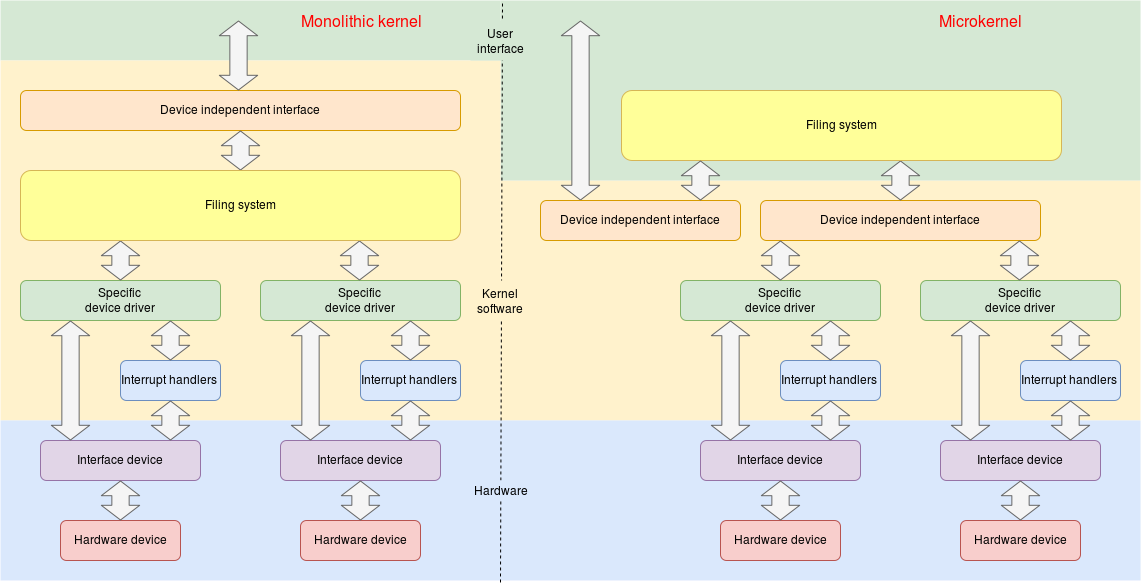 The simplest file-stores are ‘flat’: i.e. there is one place where all the files are kept.

Another mechanism is to identify separate devices, such as “A:” or “C:” In modern systems these may be virtual rather than physically separate devices. (Think about Windows’s disk partitioning!)

A modern file-store is most likely to be hierarchical with a tree-like structure of arbitrary depth. Each tree has a single ‘root’ which branches repeatedly. Windows systems still retain separate “roots” for each (virtual) device though.

Unix (on the other hand) file-store mounts devices in a single ‘tree’, so different disks (and other stuff) appear as branches. 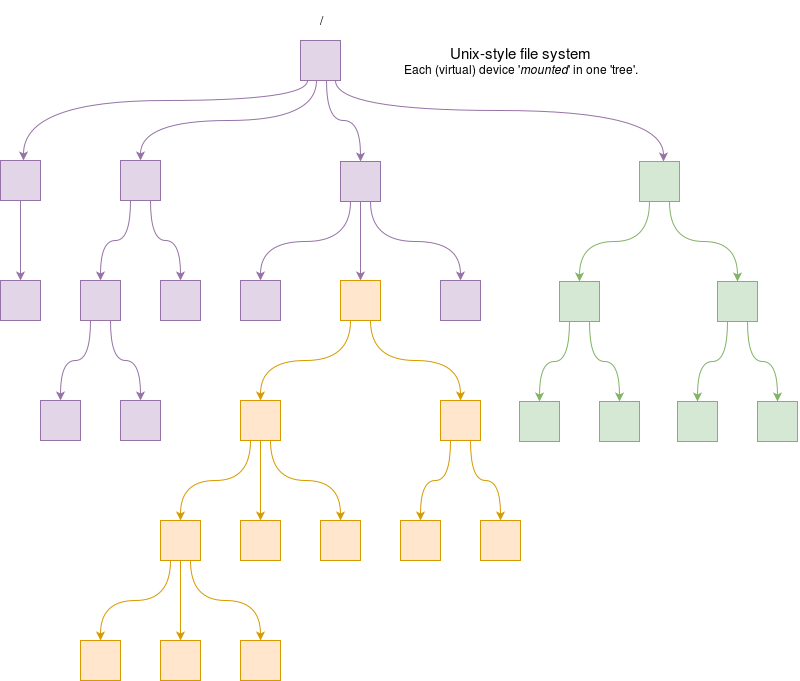 Every Unix directory contains at least two files: these are “.” and “..”. Thus the parent directory is explicitly specified. 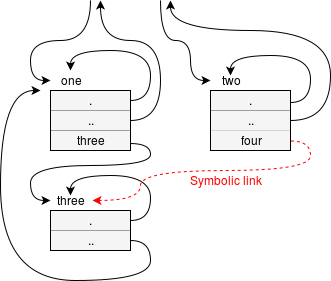 files can vary in number and length. If files are laid out on a disk as contiguous blocks, it will suffers particularly if/when an existing file is extended in length. Most systems will therefore allow the file block placement to be fragmented rather than contiguous, with some way of indexing the blocks so that each file specifies its own blocks in the correct order.

Despite the ability to lay out blocks at ‘random’, file systems still assume that they will be using magnetic disks (or similar) which are not truly random access devices: it is faster to read successive blocks than scattered ones. Hence the fragmentation of files will cause some slowing down.

Sometimes a disk will be deliberately partitioned to assist with this. Various utility binary files may be kept in a separate partition from the user files which change and are reorganised frequently. It is changing a partition’s contents which leads to fragmentation, so this means often-wanted files can be kept tidy and not suffer a slow-down.

A Link is an alias for a file. it is added for having a file in more than one place while not copying it.

Adding links can cause complications. The structure ceases to be a simple tree and becomes a directed graph.

Particularly, it is undesirable to form cycles in this graph: recursive searches would never reach the ‘bottom’ of the structure(since it loop inside the cycle forever). A particular system way therefore not allow such links to be created.

In Unix, at least, there is more than one way of building a link:

A file is the basic storage unit in a filing system. They are large but slow to access (relative to main memory structures), possibly accessible by many users and processes, and permanent.

Each file comprises a standard set of file attributes (e.g. the file size) and a variable number of blocks/“clusters” which contain the data. It is normal (but not compulsory) to keep only one type of data in each file.

The data may be structured into records, either by the filing system itself or through user preference.

Most modern file systems leave any structuring to the user and regard the body of the file as a large array of (usually) bytes.

Some operating systems may allow the virtual mapping of a file into the address space for added convenience.

When reading (or writing) a file there is an associated position, this is not part of the file though but is maintained by the access process. It is possible to have multiple processes reading the same file at different places simultaneously.

A file will typically have some type part of which may be maintained by the file system and some from the user’s knowledge. Each file has some unique identifier but the user will usually have a human-readable name by which it can be identified. This “file name” may or may not be part of the file’s attributes.

The file-store holds a large number of files which represent numerous different things. There are various ways in which the file type can be classified.

Unix, Windows etc. show various filenames in a directory (“folder”) which are not necessarily immediately distinguishable to the user as ‘regular’ files or subdirectories. This is an important distinction for the filing system itself and the information is kept within the file attributes.

File browsers and similar tools use the following ways to deduce what a file actually contains:

It is common for users to imply the type of a file with its name, often with a suffix extension . For example, a ‘text’ file may have a name like file.txt.
In some systems this extension was logically separate from the file-name and formed part of the metadata.
On common modern systems (Unix, Windows) this is not the case and it is there purely for human convenience.

The associated metadata of a file containing information about it is called file attribute.

The descriptor will be created when a file is opened and is associated with a particular file within a particular process. It is used for immediate file access.
It will hold information such as:

Like the file attributes, a file descriptor holds some metadata about a file. However these are not the same thing:

In the simple case, this could support multiple users of a system so that each user’s files were private. On its own, this would be rather primitive because it would imply that every user needed a separate copy of every application program etc.

Unix-like systems typically have three classes of file access permission which, combined with other information, provide reasonably flexible access control. These are part of a file’s attributes. The relevant information is:

For a regular file:

Permissions for a directory are similar although:

It is possible to follow through an ‘executable’ directory even if it is not readable.

Groups are defined in a system file, which itself should only be writeable by ‘root’ to keep the system secure.

They allow a group of users access to particular space so they can work together whilst excluding the ‘general public’.

File permissions have a similar function to memory access permissions, providing not only security against intrusion but also safety against accident. The usual general applications binaries will probably be owned by root – or some other non-usual UID – and not be writeable by anyone else, thus they can be read and executed but not deleted.

Write-protecting files is often a good safety strategy. Similarly, files such as photographs can be set so no one will (successfully) attempt to execute them!

In Unix(-like) file systems there is a default set of file permissions for files created by each process. This is called umask.

A more sophisticated means of controlling file (and other) permissions is an Access Control List (ACL). Such a list contains entries which specify the permissions of file access for each file for each user, allowing more selective permission control than single groups. The list is referenced by the filing system to allow or deny access to that file.

Access control may offer other features, such as logging access to a file for audit and security purposes. It can then be possible to track everyone looked at or changed a file and when. This is usually only important when dealing with sensitive data.

Users usually identify files with filenames or a path to a file. The name is a string which is an inconvenient item for the OS to handle. It is therefore usual to associate an abstract handle leading to a file descriptor of a file which is in use.

Exactly what the handle is does not usually matter to a user. It is just something with which the user can identify a particular file.

This gives access to the file descriptor via various ‘method’ calls:

The first thing to do is open a file. This will then fetch a block of the file into a buffer which prevents a disk access on every Read call to save resources(Caching again!).

Reads are then made from the buffer, which is refilled when necessary. Read operations can continue until the End Of File (EOF), a point which prevents further reading. The file can be closed at any time.

Other things may be mapped to ‘look like’ files and the same, device independent interface. These include:

A Stream is a serial flow of data. It is not the same as a file: files can be addressed in a ‘random’ manner. However, files are not infrequently read or written as serial streams.

In this case, the stream is an unstructured, serial succession of bytes. Input from the stream will give the next byte – if and when there is one – and the byte is removed from the input sequence in the process. Output to a stream will output – assuming no ‘back-pressure’ from something (such as writing a file) being slow further downstream; again the byte is then ‘gone’.

I/O devices can also be treated as streams, such as keyboards.

All Unix processes are provided with three standard streams:

Processes can ‘get’ and ‘put’ characters to these streams in various ways. They are typically the default source/sink of input/output in system applications.

In Unix (and similar operating systems) a ‘pipe’ is a means of passing a serial stream of data from one process to another.

A pipe is a FIFO queue with two interfaces – one for inserting data and one for removing them.

Pipes can be created to link processes. A typical use for pipes is as a redirection of standard I/O streams, often invoked from a shell.

Used in Unix systems, an i-node is a structure containing some file attributes and an array of pointers to blocks used by a particular file.

an i-node is quite small (and a fixed size) thus it can only point to a limited number of blocks. This could limit the maximum file size rather seriously.

However, not all the blocks need to contain data. A block can, instead, be filled with pointers to other blocks. This allows considerable expansion. If that is not sufficient the ‘other blocks’ can also be pointers themselves. Some known convention can be used to determine the meaning of each item. 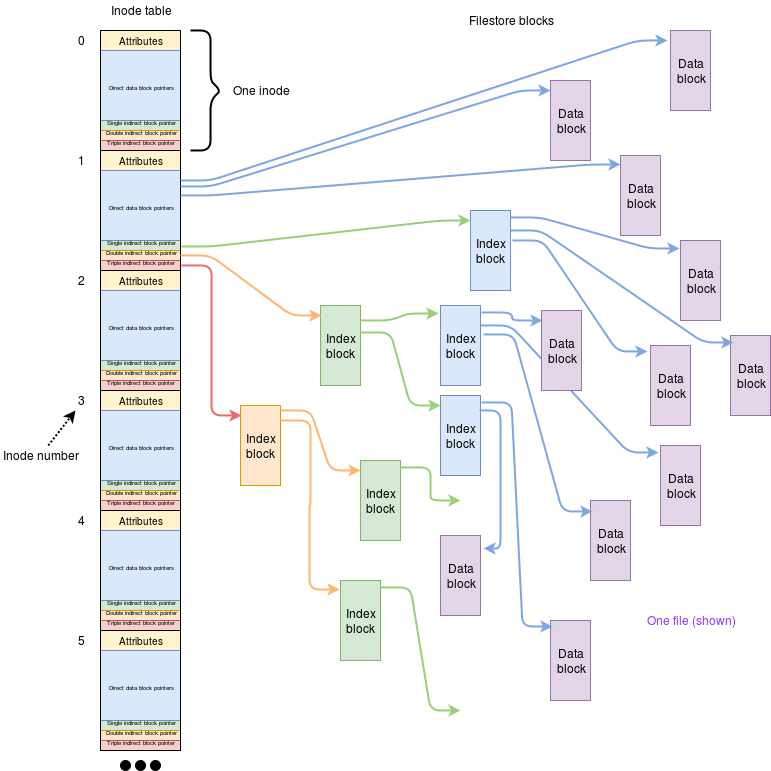